It took some time to figure out what to write about our return journey across the North Sea. Part of me did not want to dwell much upon what happened when and where; the other part thinks that it is important to present not just the ups, but also the downs… so here we go!

After a stormy trip from Pinn Mill the previous day, we left Lowestoft with little wind; not enough to sail. But some more wind was predicted for later on, so we were hopeful that maybe we wouldn’t have to use the engine all the way (like during our first crossing). I remember some disappointment though, because the swell and the waves from the days before were still present at sea. We anticipated for a nice flat sea today…. none of that. So our skipper became seasick after a few miles; and stayed that way the following hours.

Our plan was to sail/motor to Den Helder, and from there on visit the Dutch islands Vlieland and/or Terschelling in the days we had still left for our vacation. So a few hours after having left Lowestoft, we set a more NE course. Although no wind or rain had been predicted in any of the forecasts we had checked, we witnessed the nearby formation of some very dark clouds with funnels coming out of them. Not a pleasant sight when you are 40nm out on the sea. Our instinct was to go in the opposite direction as fast as possible. As the clouds were going NE this meant we had to go SE and hope to leave them behind. We could hoist some sail too, making the progress faster and a bit more enjoyable (the boat was more steady and not rocking around that much, as windspeed near the clouds increased). The nasty clouds were going towards Den Helder and therefore we changed to plan B and set a course to IJmuiden. But managing this storm and adjusting the sails had taken its toll on our skipper. Since he had been seasick for almost 10 hours now, he had not much strength left in his body. We decided it was best if he laid down inside the boat, and I would manage the ship. The route for plan B had already been programmed in the plotter the day before, so I just had to ‘follow the line’….!

Moby-Dick is equipped with a great autopilot, and I am thankful for that, because it would have been very hard to steer manually for such a long distance with these waves. As soon as he saw his father was really not doing well, our 13-year-old son offered to help me out and stay awake with me during the night to come. Although I honestly doubted that he could stay awake, I was very much moved by his offer and accepted. Our youngest son (7) did not mind the waves at all. He felt great, was continuously asking for food (the only thing I could offer him were crackers at that time) and was reading one Donald Duck comic book after another. Our 10-year-old son lay in bed with his father, after he had taken some seasickness medication that made him feel very drowsy. So at that time the waves were seriously high, I was sitting outside with 2 boys and suddenly the boat was rocked from the side at a steep angle. It made me fly from starboard to port and I could just grip the pilot stand to avoid serious injury (or worse: falling off the boat). It made me realize that we needed to wear safety lines, even in the cockpit, under these conditions. Also, there was another front coming our way. This one was very wide, no funnels, but it moved at such a great speed that it was impossible to avoid. I kept my course and hoped for the best. Right near our boat the clouds separated a bit, and we did not notice any changes in wind speed. And were thankful for that…

All in all, you might say that I felt very small and in awe of nature’s elements. Nothing like our vacation last year, when we sailed along the Dutch and German coastline. I felt strong and had lots of confidence in my newly discovered capabilities on the boat. But none of that, today. It was actually quite exhausting. It was nearly full moon, but it set quite late. I promised my youngest son that he could stay awake for as long as he liked, today. He read his Donald Ducks until it was really too dark to see anything. Then we watched the stars together, which was hard to do with many clouds. Finally, around 23.30 pm he felt cold and went to bed on his own. My oldest son tried to stay awake for as long as he could, and left for bed around midnight, too. He did promise to come back later on. By that time I was tired, my back ached from keeping my balance all the time, and I felt weak from not eating much the entire day. A can of Coca-cola helped me to stay awake, and gave some much-needed energy (ahh, it’s so sweet!). Following the line, we were now close to the offshore anchoring site near IJmuiden. Suddenly I realized the our track was much too close to an oil platform. We should keep a certain distance, but how much? Skipper would now if it had to be 1 or 2 nm, but he was finally asleep so I didn’t want to wake him up. I decided to follow the anchor site perimeter and that should be enough. Shortly after, we had and encounter with a dredging vessel that showed on his AIS as a status ‘moored’. It started dredging and our navionics plotter had some difficulty updating its information. We could visually check the actual direction it was going from its red/green navigation lights, but on the plotter there was a significant lag time. One time, it came right at us when it made a sharp turn. But the vessel had clearly seen our AIS and kept well out of our way.

To my great surprise, my oldest son came back after 2 hours of sleep. I was so happy! This meant I could lay down for a few minutes and rest my back, whilst checking the plotter and talking to my son. As he had never been outside during the night, I explained to him about the lights he was seeing, what was the meaning of green and red lights and so on. The plotter showed a fishing boat about to cross our path; I showed it on the plotter and asked him to keep a good look out for it. After laying down for a few minutes, I noticed the fishing boat had already crossed on the plotter and I asked my son, to point to that boat. He couldn’t, however. Which shows that it takes some practicing. But these conditions were not really ideal for a first lesson….

After passing the offshore mooring site, we were much closer to the beach and the big waves slowly disappeared. Skipper now felt much better, and left his berth to help outside. Which was good, since we had to find a dock in the marina in about half an hour. And it was still night; pretty dark outside. My back was hurting like crazy at this point, so I went inside to lay down for a few minutes. When it was time to moor, I could hardly push myself to get up again, so tired… my teeth were chattering from the cold and fatigue. But we had made it in one piece, what a big relief! 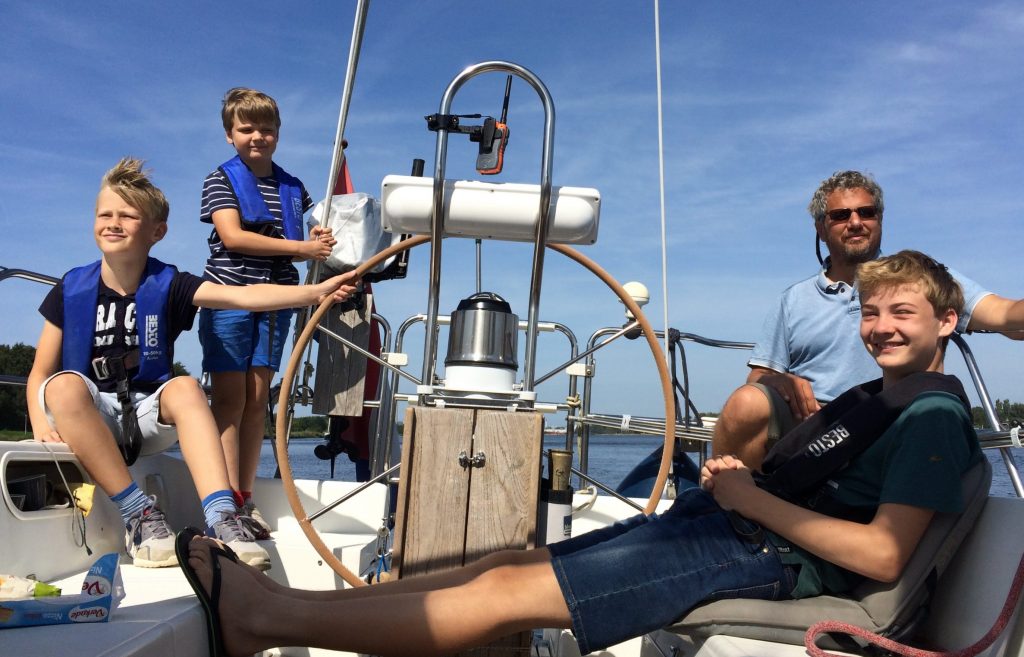 Happy crew, back in Holland again!