We left Lowestoft for a short trip to Southwold. Unfortunately, wind was SW so it took a bit more time and a lot of waves on the bow before we reached it. The entrance to river Blyth was not easy to find, at first. It consisted of two small dark jetties; somewhat an understatement of an harbour entrance, in my opinion. In our Dutch guide to the East Coast harbours we were instructed to call the harbour master before entering the river, so we did. After turning the boat in the strong inward current, we looked for a place to moor our boat. Not many boats were suitable since most were too small, but we found one and asked the owners if we could moor alongside. They acted somewhat surprised and I soon found out why, because suddenly the harbour master whistled sharply, and shouted we had to moor somewhere else! He helped us moor alongside a big motorvessel in the strong current (2kts) and instructed us to attach some additional lines on both bow and stern, as he predicted that the current would be up to 5 kts later that day.

He was polite enough, but I got the feeling that he was a bit irritated, somehow. So when I paid our mooring fees, I asked him what is the regular way of doing things in English harbours. According to him, you normally make a reservation when planning to go to a new harbour. When you are close, you call the harbour master so he knows that you are coming in. He will ask for details of the ship (length, beam, draft etc). And once in the harbour, you always wait for the harbour master to show you the mooring site. You need also inform him on the VHF when leaving, so he knows what traffic is to be expected. Right! This is different from how we do things in Dutch marinas (we normally find our own berths along another ship or on the visitor pontoon as we think are suitable; then go to the marina office to ask for detailed instructions if there are any), but it seems polite to do it the English way so we immediately adopted this. I apologized to Peter and explained the Dutch way of doing things. I was glad I had this conversation at the start of our vacation, and not at the end! 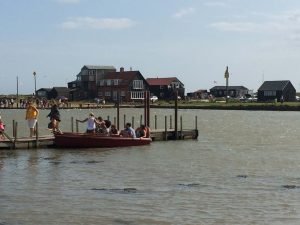 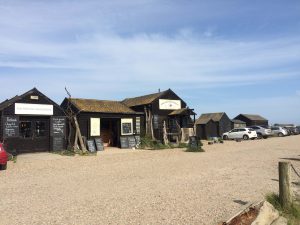 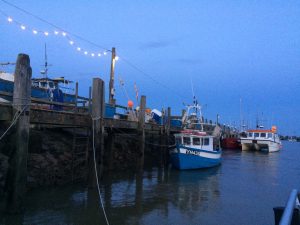 Things to do in Southwold: we made a nice trip along a public footpath to Southwold. There, we enjoyed ice-creams and had a look in the sailor’s reading room (near the beach) where some interesting marine trench art was displayed. We found some nautic cushions to decorate our ship’s interior and visited the RNLI shop. A definite must-go in our opinion is the harbour inn that served us a local brewed beer, Adnam’s Ghost Ship, and battered cod with chips. It has a no-kids-allowed-area (we don’t have that in Dutch pubs) but kids are welcome to eat anywhere else in the pub. You can also take the foot ferry to the north side of the river and visit Walberswick (home of many celebrities).

Next day, the weather was still not optimal but nevertheless we decided to head south towards River Deben (Felixtowe Ferry). According to the harbour master, the best time to leave in the direction of Felixtowe was shortly after low tide (with draft 1.35m). Again, we battled against the SW wind until we got to the Aldeburgh ridge. There, the waves offshore were becoming increasingly bigger and we decided to follow the shoreline more closely. Since sailing was not possible further on, we started the engine and headed south. Soon, near Thorpeness (disused lighthouse) the waves became steeper and the distance between them shorter. A rough half-hour followed, and the ship’s bow disappeared deep below the seawater numerous times. Finally, near the River Alde entrance, the sea became calmer. What had just happened? We experienced the wind against tide effect, which was enhanced by the elevation of the seabed in the trough next near Thorpeness. This effect was so big, that it completely surprised us. Still shaking from this experience, we found the River Deben entrance and called the new harbour master of Felixtowe Ferry. Although our East Coast harbour guide warned us that the approach was difficult at times, the harbour master ensured us that there was plenty of water at the bar and we could continue coming in. The evening before, we studied the River Deben approach on a local website: www.debenestuarypilot.co.uk that provided useful information on where to go and where to stay away. The harbour master listens to VHF 8 and uses ‘Odd Times’ as a callsign (no joke). He was just giving a tour around the harbour to some tourists in his blue boat, and showed us an empty mooring near the ferry. It was the first time ever that we were going to use a mooring on a river, but it turned out to be not difficult at all. Simply turn the boat with bow against the current, get closer to the buoy slowly, use a hook to pull up the rope and/or small buoy attached to it, and fasten the mooring line to the bow. 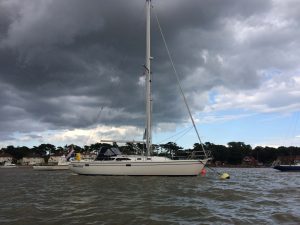 Interestingly, as the tide changes from high to low, so does your view! (Because the boat turns around in the current.) Then, during a short time when the current actually changes from inward to outward, the boat starts moving around uncomfortably in the sea swell. As soon as the current sets, the boat lies steady again.

Things to do in Felixtowe Ferry: we took our tender and visited the south (Ferry Boat Inn) and the north (beach walk, Bawdsey Manor) shore of the river. There a no facilities except for public toilets; mooring fees were only £10,- (paid cash), though. If you have no tender of your own, the foot ferry will come and pick you up from your boat. It is also possible to go up the rivier with your boat or tender with rising tide. (Be sure to go back in time, though!)

Next day, we wanted to reach Ipswich because a storm was predicted for the upcoming weekend. According to our new harbour master, the best time to leave was 2,5 hrs after low tide. We took his advice, and waited endlessly (or so it seemed) until he came alongside with his boat and informed us that we could leave a little bit earlier; as there was already about 2m of water around the entrance. We followed the buoys as he had instructed us, but nonetheless the water was only 1.8-1.9m deep around the bar so just enough for us to pass it!

It was only a short distance to Felixtowe, and we decided to follow the ‘small craft route’ indicated on the maps. That way, we crossed the busy shipway between Harwich and Felixtowe and followed it upstream on the south side.

After we had crossed the river Stour with its red lightships, and passed the Felixtowe cargo terminals, we crossed the river Orwell over to the starboard side. At this point, the river became more calm, with nice views of the countryside all around. Lots of yachts were sailing in both directions, we passed the famous Pin Mill and the chic Royal Harwich Sailing Club. We noticed that most yachts called the Ipswich lock after passing under the motorway bridge, so we did as well. However, the lock was almost on free flow (because it was around high water) so we didn’t have to wait long. We got a berth in a quiet corner of the Ipswich Haven Marina and were comfortably sheltered from the wind during the next 2 stormy days.

Things to do: we had a good look around Ipswich and the marinas. Some of the old buildings around this former merchants’ harbour have been demolished, but others have been redeveloped with good taste. Ipswich played a big role in the import of grain from Australia, some 100 years ago. We enjoyed our meal at the child-friendly Pizza Express (tip: make an online reservation) which is also suitable for individuals with dietary needs. WiFi in the marina was fine, so the kids could watch a movie whilst we re-mounted the anchor winch that had been leaking a great deal onto the bow mattresses during our Thorpeness adventure some days before.

Read more about our trip in Ipswich – Brightlingsea – Heybridge

Shotley Point and Ganges After the storm had passed, we very much liked to sail again…

Sailing from IJmuiden to Lowestoft

This year, for our 3-week vacation, we chose to sail to the south coast of England.…