After the storm had passed, we very much liked to sail again after spending 2 days in a marina. We decided to go to Shotley Point, near Felixtowe, so when the wind dropped below 5 Bft the next day we could easily go to Brightlingsea. Before leaving Ipswich Haven Marina, we called the lock master who informed us the lock was not on free flow, so we had to be locked out. With our sails shortened, we sailed towards the river Stour, where a strong tidal current was being made even worse by the wind. We rounded the green ‘Ganges’ buoy and approached the Shotley lock, where the rear wind made it difficult to moor along the lock wall. You have to act fast in certain circumstances, so I threw my line with great dedication around a bollard …. And in the action, the line pushed our portable VHF radio (which I carried on my life vest) loose and it fell down, deep into the water of the lock!

This, off course, had a negative impact on my mood. To improve spirits, we decided to go visit Harwich with the foot ferry. It didn’t take us long to find out that the ferry didn’t go that day, because of the strong winds…. Our plan B was to walk along the Stour river, but a mile upstream we witnessed a mentally challenged person trying to swim in the muddy waters, wearing all of his clothes including a hoodie. Rescue boats were soon at the site, but the man was shouting and behaving unpredictable, so we went back to the marina with our kids. After a visit to the pub, we took a look around the Ganges museum. This museum is run by volunteers in one of the old buildings of the former naval academy for boys. It consists of photos, naval costumes, scale-models of ships and all sorts of objects that have been used at the site. HMS Ganges was a Training ship,  originally a Royal Navy battle ship or East India Company ship that was used to turn boys into men fit to serve in the British Fleet. Some of the boys, aged 16 and up, came voluntarily; others were given the choice either to go to prison or go to HMS Ganges. However, living conditions were far from optimal, so it was decided to close down HMS Ganges in 1906 and bring the boys to their new quarters at Shotley Point. Up to 1600 boys were trained there at one time. The actual marina is situated where they once had their running tracks. During WWII, some of the boys still under 18 years of age were sent out on warships and many of them did not return. The facility closed down in 1976. On the hill above Shotley marina you can still see the high HMS Ganges mast towering above the tree-tops. 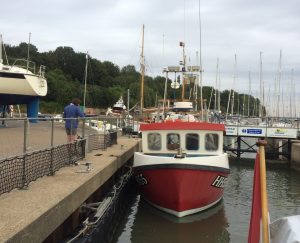 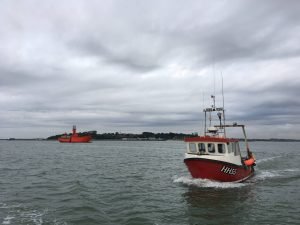 Things to do in Shotley marina: visit Ganges museum (Weekends only), walk around the marina and along the Orwell river (public footpath) or along the Stour. Visit Harwich by foot ferry (except when there’s a lot of wind). There’s a pub and a small store for groceries and boat supplies (not open on Sundays).

Most of the wind had gone the next day, so we left Shotley Point to go to Brightlingsea; a small natural harbour located in a deep tidal creek. There used to be only moorings, but in more recent years two long pontoons have been built for visitors and local boatowners. We were not the only yacht going there, that day. So after we had managed to safely pass a large number of smaller boats competing in a local sailing competition on the river Colne, we had to wait around the creek’s entrance for the harbour master to appoint a berth. After we had settled there, a third yacht was towed in by the RNLI rescue boat. Apart from that, it was probably the most peaceful visitor’s pontoon we have ever seen. In the evening, we watched the birds looking for food in the muddy creek borders. At low tide, it was so shallow that we got stuck in the sand when we used the tender to go back to the pontoon (or maybe we did too much shopping?).

We could use the toilets and showers of the local sailing club and to our delight we could also purchase a new floating VHF radio in the local supply shop. There are various grocery stores near the harbour. If you don’t have your own tender, you can VHF the taxi boat that brings you to shore (taxi fee included in mooring fee). Very nice and welcoming harbour. (The other, smaller harbour looks less inviting since it is situated among high apartment buildings.) 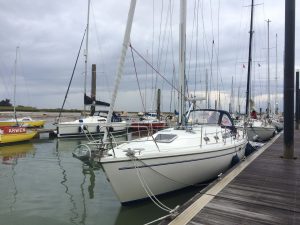 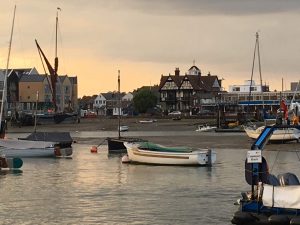 Although we enjoyed our stay at Brightlingsea, we moved on the next day towards Heybridge. The author of our harbour guide was very enthusiastic about this small settlement near Maldon, on the river Blackwater. The idea that you can only reach the lock at high water was very special, and we were somewhat anxious if all would go well. Before we left Brightlingsea, I telephoned the Heybridge lock master to announce our arrival later that day. Since the lock can open only once (or twice) at high water, he likes to know beforehand when the ships arrive and how many. Today, he was planning to operate the lock at 11.15 am so we were asked to be there, and wait around the green buoy until the lock was opened.

For the first part of our trip, we could sail; past the former nuclear power plant (Bradwell power station) and the red radio vessel (Radio Caroline) near the Blackwater entrance. More upstream, there was no room for tacking; moreover there were lots of lasers, RS’s etc competing in a local competition (here, too!) so for the most part we had to motor upstream. We were a bit early and had to wait until a vessel in the lock came out; later on we noticed there are temporary moorings that you can use if you have to wait more than a few minutes (remember: there is also a strong river current). We followed s/v Blue Streak into the lock, keeping the sticks close to our port side. Then, once in the lock, we had to wait considerable time for another Dutch vessel that was late. This skipper had no other vessel to show him the way around the sticks, so after the first meters he got stuck in the mud! Luckily, he could get out and continue his way on the right side of the sticks into the lock. 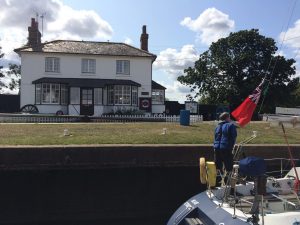 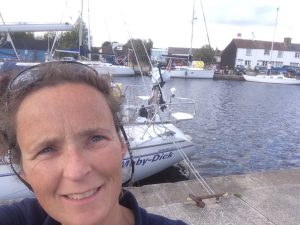 The locking procedure involved a great deal of manual work by the lock master and/or skippers helping him push the lock doors, for instance. Finally, when locking was complete, each ship was appointed a berth in the basin and the female lock manager filled us in with some local details on where to eat, where to swim and where to go. Swimming was not allowed in the basin, but the weather was nice so the boys decided to go in for a plunge near the Blackwater sailing club.

Things to do in Heybridge: swimming at the beach (not in the basin), visit the Lock Tea Room, visit the Jolly Sailor for a meal and the Old Ship for a drink, walk along the river Chelmer towards Maldon and back along the Chelmer and Blackwater navigation (canal), take your tender up the canal and buy groceries / diesel at a store nearby. The harbour has a field where children can play, there are BBQs and picnic tables. Excellent shower and laundry facilities.