Totally relaxed after our stay in Heybridge Basin, we decided it was time to think about returning home: where and when? As you have probably noticed from my previous posts, weather had not been great during our 1,5-week stay in England. We use a variety of forecast programs and they all predicted very different weather conditions for the remaining 1,5 week of our vacation. Our initial plan had been to go south and cross the channel via Ramsgate, but now we decided to go north (wind in the back, finally!) and make the Lowestoft – IJmuiden (or Den Helder) crossing one more time.

One place we heard about in one of the previous harbours, was Titchmarsh marina, located on a tidal river near Harwich. So when it was time to leave, at high tide, the Heybridge lock master invited us in with 6 other yachts (not much water left in the lock, just boats) and we were let out onto river Maldon. Of course there was another sailing competition going on, and a lovely old gaffer found her way towards sea as well. S/v Blue Streak had been our neighbor in Heybridge for the past 2 days, and apparently she went north as well, ahead of us. Wind was Bft 4-5 today, but we had a downwind course so all went well… until we passed a sailing match between some very competitive Gaffers near Mersea. The one that was leading the competition by almost a mile decided it was time to go to port (there was a buoy to our starbord) and that we had to move because they would soon cross our path. Mind you, they were sailing parallel to us in our windward direction, so in a normal situation they would have had no right of way. But now they suddenly started shouting that we should move. Unfortunately, they were that close that we had to decide in a split second what to do (gybe or luff) and had no time to prepare in advance. Bear in mind, there was about 5 Bft of wind already! We decided the best thing to do, considering the short distance available for our manoeuvre, was to gybe. My husband handled to main sail but unfortunately my oldest son could not loosen the genoa in time so we went nearly flat and had to luff all the way to stay upright and in control. Off course, there was a match going on; but to my knowledge it is never acceptable to cause a potentially dangerous situation for someone else. I would have liked to talk to the captain and hear what he was thinking….he may regret this action. But if he really thinks this is the right way to go when you see a foreign yacht not entered in the competition, then he should not be at the rudder anymore.

Anyway, we turned around 360 degrees and again started to follow Blue Streak in northerly direction. It did not take long before we had to go west towards the tidal entrance of the Walton channel. We arrived shortly before low water, so careful navigation was essential. Because our electronic navigation was out of power, we relied on old school paper maps for navigation… they work just as well!

Navigating up the Walton channel we found ourselves in a busy mooring area. The deepest part was the middle of the mooring ground, and we found motoring so close to other ships almost intrusive (but there was no other way to the marina). The last meters before the marina entrance were tensive, since we nearly got stuck in the soft mud and some engine power was needed to be able to keep moving. We are fortunate to have a small draft with our yacht, so we can reach lots of places like this, a little more off the beaten track!

Without further problems we found our reserved berth just as the harbour masters left the marina. They had probably seen us coming from afar and waited until we had safely arrived…. 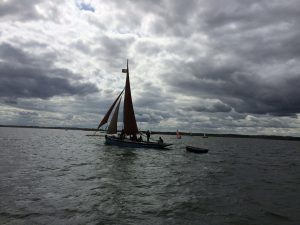 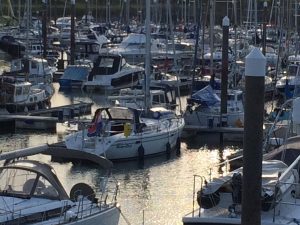 Things to do in Titchmarsh:

Next day, again, there was a lot of wind (Bft 8 and up). Titchmarsh marina is safely located in a sheltered ‘hole’, and especially at low water you hardly notice the wind at all. So this was a perfect location to sit out the storm. Further on, it is the biggest marina we visited during our vacation with a small marine shop (selling some things to eat, second-hand and new boat parts, sailing clothes, artwork) and a restaurant. Although the marina was quite busy with local boat-owners, we could not find a children’s playground anywhere. Strange… up till now, the only playing area we have seen was in Heybridge. Don’t Britsh children sail? Or aren’t they allowed to play?

We paid a visit to Walton-on-the-Naze (quite a long walk along a busy road), wondered about how many small nursing homes there were in this town, and found a few supermarkets to fill our supply of fresh foods. Just in time before the rain, we were back in the boat.

Next time, I would definitely try to spot some seals in one of the smaller channels near the marina. I’ve heard that in 2019 there were about 50 pups, so there must be a thriving seal population… we however did not see any seals. Maybe our timing was off…

It was only a short distance towards Pin Mill, so after one day of rest, we returned to the familiar Orwell river to visit Pin Mill. For Dutch sailors Pin Mill is a very attractive destination, since it can be reached from the Dutch coast and be back for work in just one weekend. ‘You should have been there once’; and so we did. We decided to find a berth in the nearby Woolverstone marina, and visit the well known Butt & Oyster pub the next day. From Woolverstone marina, this was a very pleasant 1-hour walk along the Orwell shores. And the Butt&Oyster lived up to its expectations; it’s not just any pub, and the meals are actually very good! Finally, Woolverstone marina earned some bonus points for having a children’s play area! (Nevertheless, even our 7-year old son was too big for most of the equipment.) 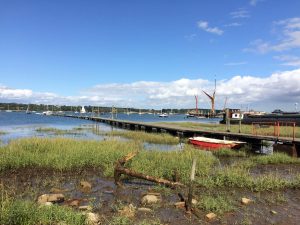 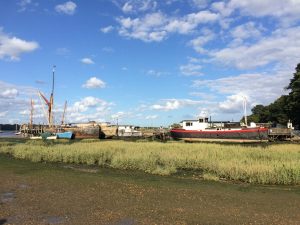